I congratulate you on Christmas and New Year holidays! Thank you all for your participation in concerts and spectator support. Me, Shurik and Slava have played in St. Petersburg and now we go to Moscow! Here is a short video from us.

I invite you to the upcoming concerts:

In addition to these concerts, in December that has already begun, me can be seen and heard at the next concerts in St. Petersburg:

December 3 - Moscosky Center of Culture and Recreation (Moscow avenue, 152), the final tournament of "Knights of the guitar and the pen", starting at 16:00, free entrance
December 10 - Moscosky Center of Culture and Recreation (Large Hall), the concert "Where the sun rises", singers-songwriters club "Vostok" marks the fiftieth anniversary, beginning at 15.00, free entrance
December 10 - Library of Kirovsky Islands (Kemskaya Street, 8 / 3), Music Night (starting at 19:00). First, classical music will be performed by professional musicians, then roughly at 20.40 I will start to play. Admission is free, come along!
December 17 - Library of Kirovsky Islands, Andrew and Natalia Pastushenko + friends. I am a friend, so I will sing a few songs at the beginning of the concert. I strongly advise you to listen to Andrew and Natasha! Starting at 19.00, free entrance.

Hopefully I'll meet some of you! See you there! :)

Two days ago, in St. Petersburg club «Dusche» there was a concert dedicated to of Port 812. This is St. Petersburg's band, which appeared on stage earlier than . We often played together, were interested in success and listened to the songs of each other. At one of the first joint concerts in "Moloko" BER-LINN sang a of the song "She is 18 in May". So, Ports are our close 'colleagues' and friends on stage.

It was very interesting to visit a punk concert again and to feel the atmosphere, to see familiar and unfamiliar faces. Thank you all for everything!

Friends, thank you all for your gifts and congratulations, and most importantly - for participation in everything that's going on!

Here is a tree we draw at the concert on November 5: 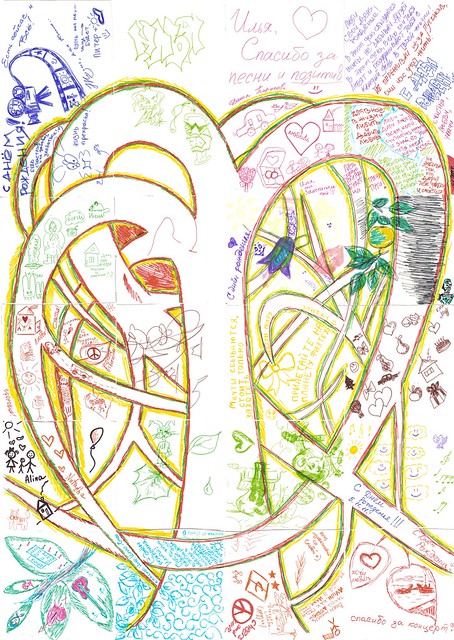 I invite you to the upcoming concerts:

Dear citizens and guests of St. Petersburg! This Saturday (October 29) all who love Ilya Orlov's work and each other, meet at 16.00 at the Pionerskaya subway station (outside) and go for a walk and talk to Udelniy park (park Chelyuskintsev). More information about the meeting can be found here: http://vk.com/club30594091

I also plan to join the meeting as I get free! Hopefully, I will not be alone :)

I present you a new site dedicated to recording, mixing and mastering rock album. The site has many audio and video examples from BER-LINN album "Children of the Spring". I think that it will be interesting for everyone who enjoys music, sound recording and our band's work :)

Specially for the site some video tutorials on mixing drums and bass-guitar were made (in Russian).

I wish you good new discoveries, inspirations and goals!

P.S. You can leave suggestions, comments and questions about the site in the comments on this post.

The arrival of the Autumn, as every change of seasons, makes me happy with global movement and development (and with the Autumn' colors as well). How many gifts Nature gives us in Autumn! It's great that we live!

First, soon to be finished the article about recording and mixing the album, with many examples from BER-LINN album released this Spring. The article will be posted on the internet, and I'll write about it in LJ.

Second, for those involved in web development, it may be interesting to see the content management system that I designed for my sites. I hope that after some time it's public version will be ready.

Third, this Saturday (September 17) you can "cheer" me and others at the Tournament of Knights of Guitar and Pen. Bard clubs compete in this tournament, and the audience (several randomly chosen people) selects the winners. Competitions are held in St. Petersburg at Moscosky avenue, 152, beginning at 16.00. Entrance is free! More information can be found here: http://www.spboovostok.ru/turnir/ (in Russian)

I wish us all inner happiness!

I invite you to a concert in St. Petersburg, which will be held on August 6 at the Library of Kirovsky Islands (Kemskaya Street 8 / 3). Beginning at 16.00, free entrance!

I've made a video from the concert-presentation of "Guitar, clock and wallpaper with airplanes" album, which took place over two years ago in "Bilingua" club, Moscow. Those of you who were there, I hope, will be pleased to recall that evening, and those who were not - have fun watching it :)

Wish you all success and good friends!
Collapse